This year marks the seventy-fifth edition of the Whitney’s signature exhibition. While Biennials are always affected by the cultural, political, and social moment, this exhibition “simply titled 2010” embodies a cross section of contemporary art production rather than a specific theme. To underscore the idea of time as an element of the Biennial and to demonstrate the influence of the past on 2010, familiar and less well-known artists from previous exhibitions are brought together in Collecting Biennials, an accompanying installation drawn from the Museum’s collection on view on the fifth floor. Balancing different media ranging from painting and sculpture to video, photography, performance, and installation, 2010 also serves as a two-way telescope through which the Whitney’s past and future can be observed
Posted by fayewang at 1:24 PM No comments:

Me with Mondrian, "Broadway Boogie Woogie"

A little History of Mondrian
Born in Holland in 1878, Piet Mondrian painted traditional subjects in an increasingly abstract style. By 1920, he adopts a totally abstract motif, employing an irregular checkerboard drawn with black lines, and with the spaces paints mostly white or sometimes in the primary colors of blue, red and yellow.

Escaping in 1940 from a Europe at war, Mondrian spends the last four years of his life in New York City, where he is fascinated by the exuberance of its city life. His paintings of that time express that exuberance. In his final painting, Broadway Boogie Woogie (1942-1943), below, the checkerboard lines, previously black, are now painted blue, gray, red and yellow. (The yellow was apparently inspired by New York’s Yellow cabs).

In Broadway Boogie Woogie, Mondrian represents the restless motion of the city.
Posted by fayewang at 8:19 PM No comments:

print
On the centennial anniversary of the Futurist Manifesto, "Never Late than Better" (Trong Gia Nguyen, curator) contends with the questionable boundaries of space, time, and reality. Re-appraising the past and re-fashioning the present, the exhibition foregrounds a “bizarro universe” that counters the time-honored day-to-days of war, speed, and misogyny that F.T. Marinetti forecast in the Manifesto, published in Le Figaro in 1909. he Futurist Manifesto Is Whenever, a supplementary guide, will evolve with the duration of the show. Altering the traditional audio-tape guide, a selection of curators, critics, artists, and musicians will walk through the show before it opens and record their immediate responses, speaking into an old-fashioned cassette recorder. Each side of the tape will contain the voice of a different ‘critic.’ The audio-guides will be available for checking out, and viewers themselves are also encouraged to record their own take on the show, which will be left behind for subsequent viewers. At the exhibition’s conclusion, the collection of tapes will together form the ‘exhibition catalogue.’nyartbeat.com

Enough with the introduction. It was a great opening with a great amount of people coming to see the new works. Especially when they are serving free beer bottles.

Last Thursday, I went to a Bob Ross tribute at Gallery Bar located in lower Eastside by Delancey. The place started at 8pm and I was there a little bit early and boy, it was packed. There was a lady in the front that was teaching us how to paint like Bob Ross - quick and happy trees. I love the vibe especially I didn't know there were people that appreciate Bob Ross like I do. I grew watching his show when I was 5 years old. I wanted to be an artist because of him. He was my imspiration and I was happy to be there.

After 15 mins, she was done

Posted by fayewang at 8:31 PM No comments:

(CNN) -- Andrew Wyeth, the American painter perhaps best known for his painting of a young woman in a field, "Christina's World," has died, according to an official with the Brandywine River Museum in Pennsylvania. 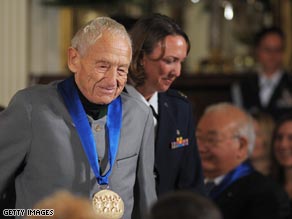 Andrew Wyeth received the National Medal of Arts from President Bush in November 2007.

Wyeth, 91, died in his sleep Thursday night at his home near Philadelphia, Pennsylvania, according to Lora Englehart, public relations coordinator for the museum.

The acclaimed artist painted landscapes and figure subjects and worked mostly in tempera and watercolor.

He was widely celebrated inside and outside of the art world. President John F. Kennedy awarded him a Presidential Freedom Award and President Richard Nixon held a dinner and a private exhibition at the White House, according to a biography on the Ask/Art Web site.

Wyeth, who lived in Chadds Ford, Pennsylvania, and Maine, "has been enormously popular and critically acclaimed since his first one-man show in 1937," according to a biography in InfoPlease.

His main subjects were the places and people of Chadds Ford and Cushing, Maine.

"Christina's World," painted in 1948, shows a disabled Maine neighbor who drags herself through a field toward her house in the distance. The painting, displayed at the Museum of Modern Art in New York, has been regarded as Wyeth's most popular.

"His 'Helga' pictures, a large group of intimate portraits of a neighbor, painted over many years, were first shown publicly in 1986," the InfoPlease biography says. Those were painted in Pennsylvania.

Wyeth, the youngest child of painter N.C. Wyeth, formally studied art with his father as a teen, "drawing in charcoal and painting in oils, the media of choice for N.C. Wyeth. It was during the family's annual summer vacations in Port Clyde, Maine, that Andrew was able to experiment with other media to find his own artistic voice," according to a biography in the Farnsworth Art Museum in Maine.
Posted by fayewang at 10:17 AM No comments:

I went to the Village Pet Shore and Charcoal Grill to see what's all the hype was. Right when I got there, I encountered many visitors already flooded the area. It was right next to Sushi Samba, a over-priced Japanese restaurant in a trendy setting. In my notion, I thought it was a real petshop but to my realization it was an art show by Banksy. Saw moving hot dog, swimming fish sticks, chimpanzee watching money porn, little chick nuggets eating and more. It a small shop which takes a 360 turn to complete the tour. The displayment can be seen outside as well. It was a fun interesting experience. The show ended by October 31st. Posted by fayewang at 9:23 PM No comments:

Racking up for Bikers at Wall St

David Byrne and the New York City Department of Transportation, in conjunction with New York art gallery PaceWildenstein, have unveiled nine unique bicycle racks designed by DB and installed in various locations throughout Manhattan and Brooklyn. An avid bicyclist for almost 30 years, Byrne was invited to join the panel of jurors selected by the DOT to judge a design competition for outdoor and indoor bicycle racks. Inspired by the city's initiative, he submitted some original design ideas of his own named after specific locations and neighborhoods, which the DOT enthusiastically agreed to install for a period of 364 days.

The coffee cup (Location: Amsterdam between 110th and 111th St, near the Hungarian Pastry Shop)