SAO PAULO, Brazil - Armed with nothing more than a crow bar and a car jack, it took thieves just three minutes to steal paintings by Pablo Picasso and Candido Portinari, worth millions of dollars, from Brazil's premier modern art museum.

Authorities said they hit the Sao Paulo Museum of Art just before dawn Thursday — a time when the city's busiest avenue is deserted and the guards inside were going through their shift change.

Jumping over a glass partition, they climbed an open concrete staircase leading up into the entrance of the two-story modernist building, which hovers over a large plaza on stilts of steel.

For a short time, they could have been seen from blocks away. But the thieves worked quickly. A few jabs of the crowbar, and they were able to slip a common car jack under the metal security gate. A few more cranks and they squeezed inside.

Hazy images from a security camera shows three men going in at 5:09 a.m. They smashed through two glass doors, ran to the museum's top floor and grabbed the two framed paintings from different rooms, somehow avoiding nearby guards.

The alarm never rang, and by 5:12 a.m., they were making their escape.

"It was a professional job; it was something they studied because the paintings were in different rooms," said the lead police investigator, Marcos Gomes de Moura.

Picasso painted "Portrait of Suzanne Bloch," in 1904 during his Blue Period. It is among the most valuable pieces in the collection, museum spokesman Eduardo Cosomano said.

"The prices paid for such works would be incalculable, enough to give you vertigo," said curator Miriam Alzuri of the Bellas Artes Museum of Bilbao, Spain.

Jones Bergamin, a Sao Paulo gallery director, estimated the Picasso at about $50 million and the Portinari $5-$6 million.

"I talked to friends at Christie's and Sotheby's and made the estimate based on the last Picasso that sold, "Garcon Avec Pipe," which is from the same blue period," Bergamin said.

But Bergamin disagrees with the police theory that the thieves are professionals, since they ran past many other valuable paintings, including a very important Renoir, a Raphael, and paintings by Rembrandt and Degas.

The Picasso measures 26 by 21 inches and the Portinari 40 by 32 inches, the museum said.

Police believe there a fourth person may have acted as a lookout because they found headphones near the museum's entrance.

Thieves attempted a robbery at the same museum in late October but were foiled by the alarm system. This time, the alarm failed. Moura said he believes Thursday's robbery was carried out by the same gang.

Police were interviewing 30 museum employees, but none of the guards had fewer than 10 years on the job, Moura said. They also alerted Interpol and airport police to try to stop the paintings from leaving Brazil.

And while Moura doubts the paintings are being held for ransom, police are ruling nothing out.

"Everything indicates they were sent to do it by some wealthy art lover for his own collection — someone who, although wealthy, was not rich enough to buy the paintings," Moura said.

"O Lavrador de Cafe," which depicts a coffee picker, was painted in 1939 and is one of the most renowned works by one of Brazil's most famous painters. Portinari (1903-1962) was an influential practitioner of the "neo-realism" style. His best known works outside Brazil are the "Guerra e Paz" or "War and Peace" panels at the United Nations in New York.

The museum said this was the first robbery in its 60-year history, but art thieves also hit Brazil last year, when a gang of five men used a carnival street parade to cover the theft of four paintings by Dali, Picasso, Monet and Cezanne from a Rio de Janeiro art museum. Those works, valued at around $40 million have never been recovered.

With the museum closed Thursday as police searched for clues, a handful of visitors were frustrated and perplexed.

"Who could imagine that someone could enter a museum and walk out with two paintings? It's inconceivable," said Deborah Regina Fernandes, a 37-year-old housewife who came with family and friends.

Associated Press Writers Michael Astor in Rio de Janeiro and Harold Heckle in Madrid contributed to this report.
Posted by fayewang at 6:12 AM No comments: 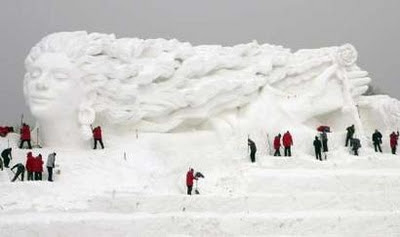 In Harbin of Heilongjiang Province, China, snow sculptors from around the globe have gathered for the 20th International Snow Sculpture Art Expo. One of the design is Romantic Feelings (shown above and below), the 115-foot-high and 656-foot-long snow sculpture believed to be the largest in the world. 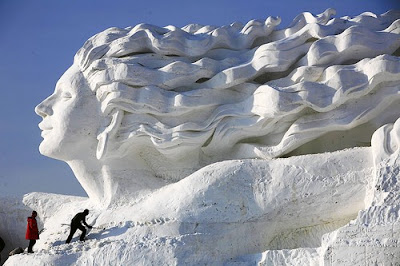 Posted by fayewang at 7:10 PM No comments:

Will Ryman
The Sidewalk: 3 Card Monty (2007)The Directors of Marlborough Gallery are pleased to announce the opening of of an exhibition of new work by the young American sculptor, Will Ryman. This exhibition will take place on the first floor of Marlborough's new Chelsea gallery, 545 West 25th Street, and it will be Ryman's first New York show with the gallery.

The exhibition will show Ryman's most ambitious work to date. Entitled Tuesday Afternoon, it will be comprised of two installations which are conceptually interrelated as happening at a concurrent time on a particular day. Before devoting himself to sculpture Ryman, always interested in the theater of human emotions, wrote plays. In the installations at Marlborough he creates a setting in time, Tuesday afternoon, in a similar way that a playwright might structure a play. The first installation is entitled Bed; the second, The Sidewalk, and both works are made of mixed media materials - steel, paper mâché, epoxy resin, acrylic paint, PVC tubing, wire mesh, Styrofoam and wood.

As described by Edward Leffingwell in the essay of the exhibition catalog, “The monumental bed (15 x 27 x 8 feet) bisects the gallery in what amounts to middle distance. With one arm dangling from the bedside, the recumbent figure occupies a dream-filled moment just this side of waking. Ryman speaks of these yards of rumpled sheets as a landscape of rolling hills and mountains, telegraphing the installation's scale to the vernacular urban landscape of the sidewalk and the street. A floor lamp towers above a scattering of ale cans, a Moleskin journal and pen, some keys and a watch, a half-eaten bag of Doritos, cigarettes, matches, and slippers tucked neatly at a corner of the bed. An emblem of fidelity, a dog, rests at his side, tail raised in the laziest of wags. With the ominous presence of an alarm about to ring, a burning cigarette dangles from the dreamer's hand signaling the approaching interruption of his reverie where half asleep he awakens from the dream.

The Sidewalk is composed of twelve different groups of figures which are conceived in the artist's imagination as a slice of New York street life. The Sidewalk is positioned in the gallery to run parallel to its front windows, thus creating an echo of the sidewalk outside. According to Leffingwell, both works “are conceived as objects and ideas fixed in a single moment of stopped time, the bustling population of a side walk on an active urban street and a massive dreaming figure sprawled on a mass of tangled sheets.”

Ryman says his works “explore the bare bones of emotions, of human frailty, the bare bones of vulnerability, the rawness of psychology, and conditions that are human,” and he wants the viewer to see each piece as an act in a drama. He states his mission is to break subject matter down to its truest form, and he wants to do that with emotions and relationships. As he puts it, “I am trying to turn the conditions within us into the three dimensional.”

Commenting on that motive Leffingwell concludes his essay by saying, Ryman's “tableaux venture beyond the theatrical and performative, their stilled activity eliciting the capacity for discovery and surprise, the impetus to look and the capability to recognize a common humanity.”

Before joining Marlborough Ryman had five solo shows: two in New York, one in Seattle and two in Munich. From 1990 to 2001 he studied writing in various workshops and wrote two plays and thirty one-act plays. Since 2001 he has devoted himself completely to sculpture. He lives and works in New York City.
Posted by fayewang at 9:26 PM No comments:

Fang Lei, a Beijing-based independent curator since 1998, has curated and organized a number of exhibitions and events including the Beijing Biennale, Guangzhou Triennial, and Shanghai Biennale, etc.

Jonathan Goodman has been writing about contemporary Chinese art for more than a decade. Based in New York, he is currently teaching at the Pratt Institute and the Parsons School of Design.