I went to see Su-Mei Tse's works. P.S.1 Contemporary Art Center is pleased to present Su-Mei Tse's first solo museum exhibition in New York. Ms. Tse, an artist based in Luxembourg and Paris, will present two new works—a video and a sculptural installation. Su-Mei Tse is on view in the Third Floor Archive galleries from June 25
through September 4, 2006.

Her British and Chinese background has reflected on her point of views on cultural and personal role. A classically trained cellist, Tse creates work that investigates music, rhythm, melody, and dance. Informed by personal experience—her father is a Chinese violinist and mother an English pianist—Tse's art, which encompasses photography, sculpture, and video, combines the artistic and cultural traditions of both her parents.

As for me, I'm fascinated with comtemporary Asian Art. Se-Mei Tse created the installation to promote the relationship of East meet West. Modern object of a neon light has been a popular thing in US such as New York City, where businesses depend on neon lights to lure customers. As for Don Xi Nan Bei, it conveys us to understand the directional way of life; seek the road that is less taken (right, Robert Frost).
Posted by fayewang at 8:05 PM No comments:


NEW YORK, June 9, 2006—Takashi Murakami has been shaking up the art world since the early 1990s with his unconventional approach to both subject matter and artistic production.

The Japanese artist and curator first made an appearance on the global art scene with his controversial Randoseru Project, for which he constructed backpacks, of the sort typically used by Japanese schoolchildren, from the skins of endangered or exotic animals.

In the mid-’90s he provoked patrons of high- and low-brow art alike by creating life-size sculptures of ultra-sexual, anime-inspired characters.

Most recently his work has blurred traditional lines between fine art and the mass-produced object by pairing his signature, cartoon-like designs with a limited-edition series of Louis Vuitton handbags.

Never content to play the traditional role of the solitary artist, Murakami has moved into even broader areas of the art world, seeking out new talent among young Japanese artists and becoming a curator for shows at the Museum of Contemporary Art-Los Angeles and the Japan Society in New York.

For creating his own art, he has developed a unique factory-style production line in studios in Tokyo and in New York—that involves dozens of artists and assistants and runs like a well-oiled machine.

Working to promote those artists who have helped him build his KaiKai Kiki studio, Murakami established the semi-annual Geisai art fair in Tokyo in 2000. Now on the brink of the fair’s 10th edition, Murakami has announced a special sneak preview of the next Gesai fair at the Volta art fair that opens in Basel next week.

Some complain that the current art market has become too commercialized. As a market-savvy artist, what’s your perspective?

It’s always funny when people say this, because it sounds like they don’t understand what a “market” is. Isn’t it a place to buy and sell? Personally, I think that the more commercialized the art market, the easier it is to understand strategically. I do appreciate all different kinds of art, though; just like I appreciate all different kinds of people. There are some people who compete in the commercial arena and there are some who abide by more personal, spiritual or idealistic guidelines. If done well, both can be equally satisfying.

You’ve done work with Louis Vuitton and others that straddles the line between art and commercial products. Do you think there are dangers to mixing art with branding and merchandizing?

I don’t think of it as straddling. I think of it as changing the line. What I’ve been talking about for years is how in Japan, that line is less defined. Both by the culture and by the past-War economic situation. Japanese people accept that art and commerce will be blended; and in fact, they are surprised by the rigid and pretentious Western hierarchy of “high art.” In the West, it certainly is dangerous to blend the two because people will throw all sorts of stones. But that’s okay—I’m ready with my hard hat.

Your work has a decidedly cartoon-like or anime-inspired aesthetic that is also quite common in other Japanese artists’ work. Why do you think there is this fixation among contemporary Japanese artists on the “cute”? Can you explain this sometimes creepy fascination among many young Japanese artists (i.e. Aya Takano, Mahomi Kunikata) with images that depict prepubescent girls in sexualized situations?

Anime is a big industry in Japan and is extremely widely and evenly broadcast, so that the majority of people grow up watching the same TV shows. You could go so far as to say that anime is part of Japan’s national consciousness.

The cute obsession is a complicated problem, but I think that it’s a pleasant and not-so-intimidating aesthetic ideal, so that is why it’s very popular. It’s good for people who are introverted, which many Japanese are. Cute is so fetishized in Japan that it’s actually also sexualized. It’s just like how Americans have a fetish with steroid body builders and breast implants. Personally, I think that’s creepy.

Tell me about how and why you developed the idea to create your own “factory-style” studio.

I was originally inspired by the Walt Disney Studio, Lucas Films and [Hayao] Miyazaki’s Ghibli Studio. I was interested in this kind of hands-on, workshop-style production space that even major film companies use.

Also, it might be a Japanese characteristic, but I’m not a solitary person. I like the dynamics of a group working together towards a single goal. The eclectic mash of individual egos, brains and wills leading to harmony and discord is an exciting force to work with, and it helps me be creative.

What’s your relationship with the artists in your studio? In addition to collaborating with you on your work, do they produce their own? How much inspiration do you receive from them? How much teaching/mentoring of them do you engage in?

The relationship is one of mutual inspiration. The artists in my studio help me work on my work, and I help them work on theirs. The extent of feedback that I give depends on the situation. Specifically, Kaikai Kiki represents the work of six exhibiting artists besides myself. These artists are all actively involved in their own work, although three of them are also regular employees of the company, which means they also have management positions.

Why do you do so much work promoting emerging Japanese artists—and as an experienced artist, what do you feel it’s important to teach them?

I like the gambling aspect of working with young artists. With the right combination of talent and guidance, you can really hit the jackpot. I would say that my biggest concern for young artists is their lack of know-how, and how that leads to them being taken advantage of by institutions and the merciless gears of the art-world machine. It is important for artists to know the facts about the market, the system, and to approach the business aspect with a clear-headed, confident attitude.

What prompted you to launch the the Geisai art fair in Tokyo? What niche does it fill on the Japanese fair calendar?

I wanted to increase awareness of art among everyday Japanese people. By making it a fun event—that everyone, regardless of funds, can enjoy—I hoped to turn a variety of people on to art. I also like that it is open-participation. This gives it a more egalitarian feeling than Western art fairs, which are really exclusive and oriented to the high-end consumer. Geisai has been a huge success. Every time, 10,000 people come to the site, and we are getting more coverage in international publications. 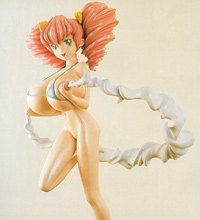